Following on from the events of NBC’S smash-hit series, The Bible, this bold new telling of the greatest story ever told centres around Jesus’ apostles during and after the son of God’s death and resurrection. John Richards edited two episodes of this ten-episode epic, including the series premiere. 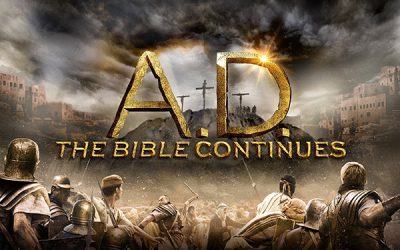 While the disciples are moved by the holy spirit to continue Jesus’ work, Caiaphas’ (Richard Coyle) sights fall to Pontius Pilate (Vincent Regan) as tensions between the people of Jerusalem and the Romans rise. John Richards edited this episode, once again working...

A.D. The Bible Continues – Episode One – The Tomb is Open

John Richards worked as editor on the very first episode of this biblical series in which the disciples are shaken as Jesus (Juan Pablo Di Pace) is sentenced to death by Pontius Pilate (Vincent Regan). Meanwhile, Peter (Adam Levy) is racked with guilt for denying...

I have known for a couple of months that my next project will be the 12 part series for NBC provisionally titled A.D. Now it's time to head for the first block of filming in Morocco and the film making town of Ouarzazate. (Pronounced Waz-ah-zat). It's always a strange...