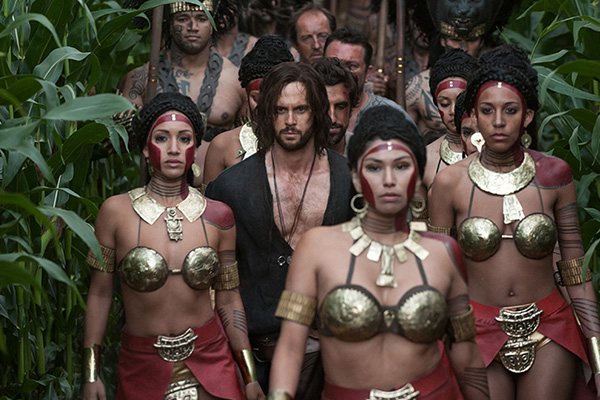 Faking a landing on a South American beach in cold Wales after the best of the summer has past isn’t an easy ask. However, we have the added script problems of trying to hide geography and timescales which are nonsense when you analyse them. If Da Vinci has merely crossed the Atlantic and landed in Venezuela, then he has thousands of miles to trek before getting to Machu Picchu. Assuming that is the walled city he seeks! He could have gone around the South Atlantic to the Pacific and up to Chile, making landfall as close to the ancient city as possible but that seems way too big a sea journey for the 15th century.  And it all happens while barely a day passes in Florence. The magic of movies answer is to hide all references to exactly where Leo is off to or how long it takes to get there.
Selling the beach landing as new and exotic comes from a great location with blue green sea, Filmston Bay in Pembroke has this. Swansea may be cold and frequently wet, but we had a perfect day. The cliffs are good but the vegetation is no match for the tropics so we had a local crew in Veracruz, Mexico find a coastline that was a close match to our location. We then designed the sort of shots we would need and shot from a boat a number of POV shots arriving on the beach. We also shot a bunch of plates of cliff top vegetation and forest floor GV’s. An Ultralite provided some stunning ariel footage that influenced the way we designed the mountain pass scene. Once again, Tom Horton and the team integrated these plates to add the tropical vegetation to the cliff tops with CG comps of the ship in the background. Riario’s wreck is also all CG. The stone column is part of the Welsh beach and is well worth visiting.
For those who don’t follow the series, the cowardly captain is Amerigo Verspuccio who jokes he might name the new country after himself, only to chose Verspuccia.