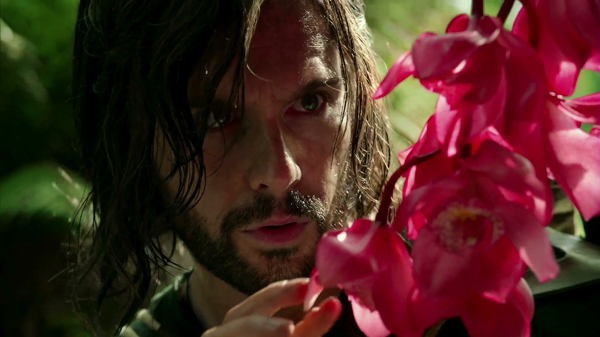 In this clip, Leonardo is back on dry land and in search of the walled city that he believes to be the home of the Book of Leaves. He and Zo have two of the seamen from the voyage across the Atlantic with them. In true Star Trek ensign red shirt fashion, these crewmen’s fate is clear!

The scene is designed to bridge us between the South American coast and the mountains that contain the ancient city. It also underlines Leo’s delight in all things new. We did cut out a shot of him finding a large tarantula spider in favour of him liking the orchids with the new shade of vermillion, it was one bit of placed wildlife too much. This flower prop is heavily enhanced using secondary color correction in the grade making it a colour quite different to the actual prop.
The wide angle behind the guys as they move through the river, which is of course a lake, has one of our South American mountains added in. The shot is composed exactly as you would frame it if a mountain was in the background and Tom Horton and the VFX team worked on the colour and type of mountain so as to achieve a good blend in.
The best part of the behind the camera reality is that it’s all shot in Heligan, Cornwall. Director Jon Jones shot at the end of the summer when we were allowed to machete through the undergrowth as the park clear it out each year to allow for new growth.  We were also lucky with weather as the heavens opened while the day progressed, adding to the sense of us being in a rainforest at the end of the sequence.
As an editor, recognising what isn’t working is critical and I would have liked more sweat on the guys and their clothes. This influenced me to use shots that didn’t highlight the lack of sweat and to keep the sequence shorter than scripted.
As ever, it’s a clever performance from Tom Riley. Harking back to some of the Tourette’s like speech impediment that Da Vinci exhibited under stress in the first seasons court room episode The Tower, that I also cut. Tom really does think about the character arc over many episodes and series.
I like this scene, not just because it works well, but because it is almost all in camera……apart from the mountain and a couple of fixes where we saw members of the public walking in the background!