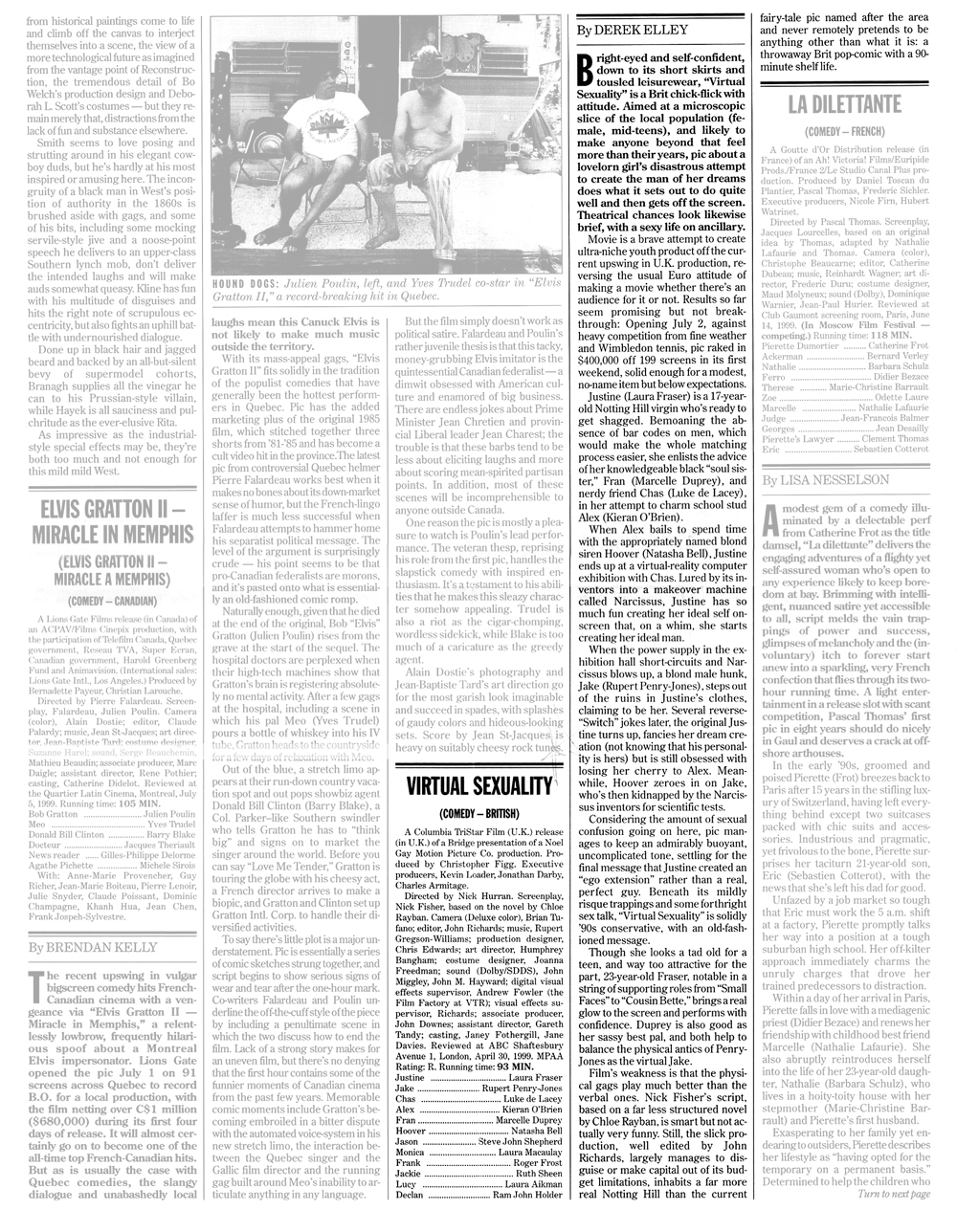 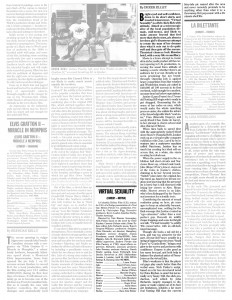 Bright eyed and self-confident, down to its short skirts and tousled leisurewear, “Virtual Sexuality” ia a Brit chick-flick with attitude. Aimed at a microscopic slice of the local population (female, mid-teens), and likely to make anyone beyond that feel more than their years, pic about a lovelorn girl’s disastrous attempt to create the man of her dreams does what it sets out to do quite well and then gets off the screen. Theatrical chances look likewise brief, with a sexy life on ancillary.

Movie is a brave attempt to create ultra-niche youth product off the current upswing in UK production, reversing the usual Euro attitude of making a movie whether there’s an audience or not. Results so far are promising but not breakthrough: Opening July 2, against heavy competition from fine weather and Wimbledon tennis, pic raked in $400,000 of 199 screens in its first weekend, solid enough for a modest, no-name item but below expectations.

Justine (Laura Fraser) is a 17 year old Notting Hill virgin who’s ready to get shagged. Bemoaning the absence of bar codes on men, which would make the whole matching process easier, she enlists the advice of her knowledgeable black “soulsister,” Fran (Marcelle Duprey), and nerdy friend Chas (Luke de Lacey), in her attempt to charm school stud Alex (Kieran O’Brien).

When Alex bails to spend time with the appropriatly named blond siren Hoover (Natasha Bell), Justine ends up at a virtual-reality computer exhibition with Chas. Lured by its inventors into a makeover machine called Narcissus, Justine has so much fun creating her ideal self onscreen that, on a whim, she starts creating her ideal man.

When the power supply in the exhibition hall short-circuits and Narcissus blows up, a blond male hunk, Jake (Rupert Penry-Jones), steps out of the ruinsin Justines clothes, claiming to be her. Several reverse “switch” jokes later, the original Justine turns up, fancies her dream creation (not knowing that his personality is hers) but is still obsessed with losing her cherry to Alex. Meanwhile, Hoover zeroes in on Jake, who is then kidnapped by the Narcissus inventors for scientific tests.

Considering the amount of sexual confusion going on here, pic manages to keep an admirably buoyant, uncomplicated tone, settling for  the final message that Justine created an “ego extension” rather than a real, perfect guy. Beneath its mildly risque trappings and som forthright sex talk, “Virtual Sexuality” is solidly ’90s conservative, with an old fashioned message.

Though she looks a tad old for a teen, and way too attractive fo rthe part, 23 year old Fraser, notable in a string of supporting roles from “Small Faces” to “Cousin Bette”, brings a real glow to the screen and performs with confidence.  Duprey is also good as her sassy best pal, and both help to balance the physical antics of Penry-Jones as the virtual Jake.

Film’s weakness is that the physical gags play much better than the verbal ones. Nick Fisher’s script, based on the far less structured novel by Cloe Rayban, is smart but not actually very funny. Still, the slick production, well edited by John Richards, largely manages to disguise or make capital out of its budget limitations, inhabits a far more real Notting Hill than the current fairy-tale pic named after the area and never remotely pretends to be anything other than what it is: a throwaway Brit pop-comic with a 90 minute shelf life.