Plots with a View – Hollywood Reporter

Plots with a view – Hollywood Reporter 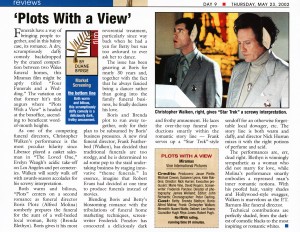 The Bottom Line. By Duane Byrge.

Both warm and bilious, this scrumptiously daffy comedy is a deliciously dark, frothy amusement.

Funerals have a way of bringing people together, and in this  balmy case, it’s romance. A dr, comedy backdropped by the crazed competition between to Welsh funeral homes, this Miramax film might be aptly titled “Four Funerals and a Wedding”. The variation on that hit’s title augurs where “Plots with a View” is headed at the box office, ascending to the beneficent word-of-mouth heights.

As one of the competing funeral directors, Christopher Walken’s performance is the most peculiar hilarity since Liberace played a casket salesman in “The Loved One”, Evelyn Waugh’s acidic take-off on Los Angeles and pet cemeteries. Walken wil surely walk off with awards-season accolades for his screwy interpretation.

Both warm and billious, “Plots” centers on a second romance as funeral director Boris Plotz (Alfred Molina) somberly prepares the funeral for the aunt of a well-heeled local woman, Betty (Brenda Blethyn). Boris gives it his most reverential treatment, particularly since way back when he had a yen for Betty but was too awkward to ever ask her for a dance.

The issue has been gnawing at Boris for nearly 30 years and, together with the fact that he alway fancied being a dancer rather than going into the family funeral business, he finally declares his love.

Boris and Betty plot to run away together, only for their plan to be subsumed by Boris’ business pressures. A new rival funeral director, Frank Featherbed (Christopher Walken), has has decided that traditional funerals are too stodgy, and he is determined to add some pep to the staid undertaking business by staging innovative “theme funerals”. In essence, imagine that Robert Evans has decided at one time to produce funerals instead of movies.

Blending Boris and Betty’s blossoming romance with the tribulations of funeral home maketing techniques, screenwriter Frederick Ponzlov has concocted a deliciously dark and frothy amusement. He laces the over-the-top funeral productions smartly within the romantic story line _ Frank serves up a “Star Trek” style sendoff for an otherwise forgetable local dowager, etc. The story line is both warm and daffy, and director Nick Hurran mixes it with the right portions of perfume and acid.

The performances are, err, dead right. Blethyn is winningly sympathetic as a woman who didnt marry foir love, while Molina’s performance smartly embodies a repressed man’s inner romantic notions. With his poofed hair, vanity shades and Hollywood style swagger, Walken is marvelous as the P.T. Barnum like funeral director.

Technical contributions are perfectly shaded, from the darkest of comedic blacks to the most inspiring of romantic whites.